Analyzing results for YOUR tests

While this article will offer general guidance, many potential errors will be app-specific. The below information is a general guide to effective triage and investigation…not a one size fits all, step by step approach. Never hesitate to reach out to our team for personalized guidance!

How do I know something went wrong?

When looking at your test results, it will be obvious pretty quickly if there was an issue detected. For starters, you will be able to see on your runs page what passed, and what failed.

This is indicated by a red or green dot alongside the run number, as pictured below.

Tracking the health of your test runs

If you go to your Tests page and select a test from your suite, you will also be able to see the status of your latest test AND follow the health of that particular test over time.

Clicking into the failed run, you will be able to see which specific tests failed, or begin diagnosing what happened in a single, isolated test. 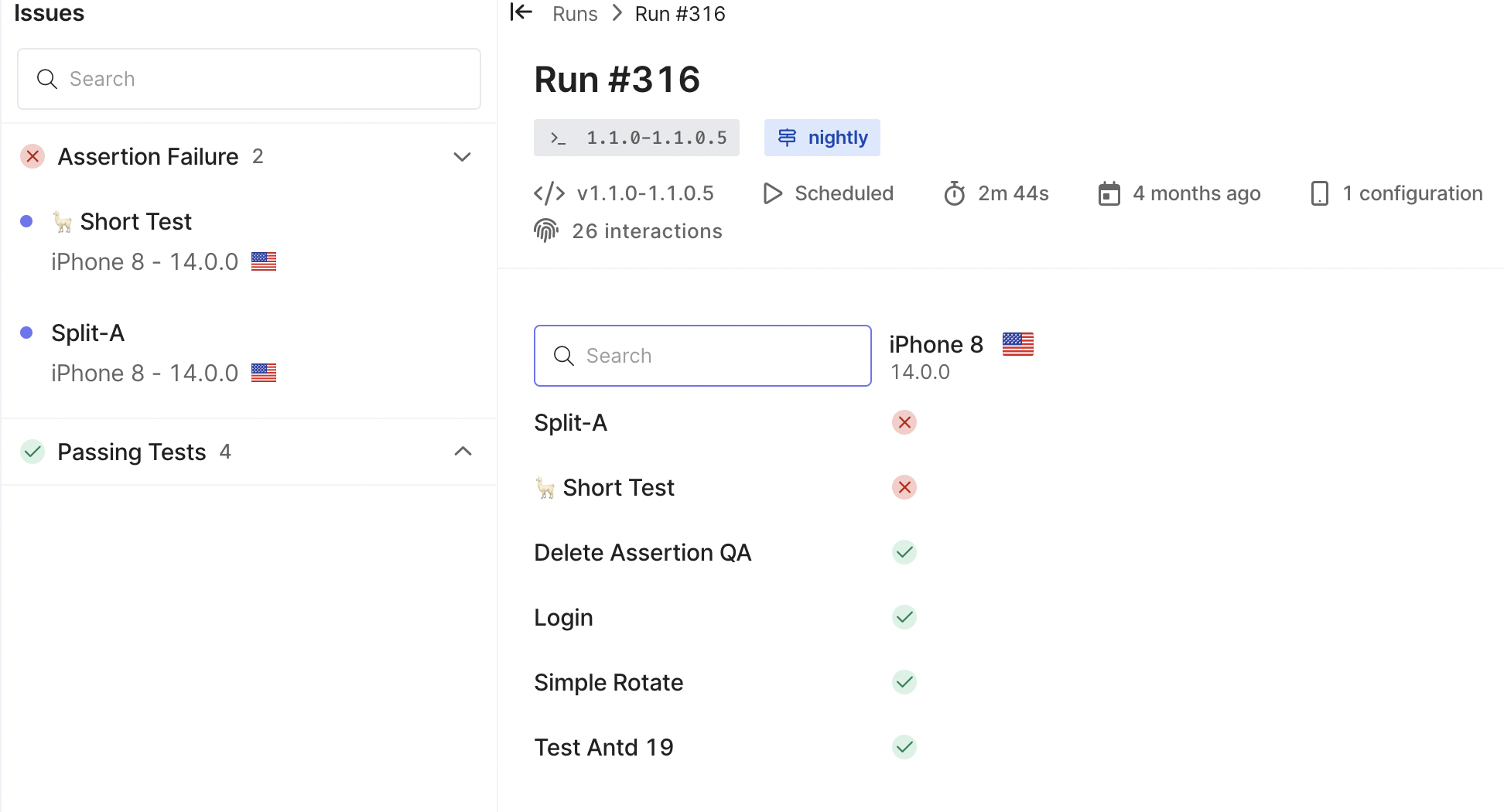 Click on the failed test you wish to investigate.

To begin troubleshooting any errors you see in Waldo, and reproducing the issue:

How do I prioritize my results?

Below, we will walk through the different errors you may see in Waldo, what they mean, and how serious they generally are.

These are independent from whether the functional test passed (going from A to B) - unless the failed assertion is directly related to an interaction failure (unable to move from point A to point B).

Adjusting assertions to accommodate wait times in your app

Sometimes, Waldo does no wait long enough for a screen to load before trying to click on an element or perform and interaction.

This is likely because the wait time required was not covered by your assertions or there is a time out issue. For more information on addressing this issue, review this article.

If an assertion fails for a known and/or accepted reason, you can simply Click into the failed step, select “Fix Assertion” and save your changes.

Could not perform interaction (medium-high severity)

This means that Waldo was not able to perform the interaction leading the the next screen in the flow.

If your UI has changed (intentionally), and it is causing your test to fail...

This can be addressed by updating the test to reflect the changes in the baseline recording.

A “flaky” test is one that yields different outcomes when played multiple times. In order to detect flakiness, Waldo will always retry an action whenever we see any kind of error when replaying a test:

There are two leading causes for flakiness:

During recording, everything works correctly. Upon replay however, if the timing is off, the tap occurs too soon on the photo and nothing can happen because the upload is not finished*.

One solution to this problem is to add an assertion on any element that will only appear after uploading completes (perhaps a checked checkbox, or some informative text). See Assertions to learn more.

Another solution is to make Waldo wait longer before attempting the interaction. This really should only need to occur if (in the example above) it would take more than 30 seconds to complete the upload of the photo. To force Waldo to wait longer on that particular screen, you can simply update the time limit (See Time Limit for more details).

In summary, key actions to address flakiness include:

This means a parent test failed and prevents dependent tests from running.

This means the build is faulty and error in the code needs to be fixed.